We fled from persecution from our various home countries but still the same persecution continues in Germany. We refugees arriving in Germany are already criminalized at the borders by forceful finger printing before our names are even known.
Our political protest started in February 2014 when we discovered the violation of our privacy by being exposed to CCTV camera observation (Close Circuit Tele Vision) that had been installed at the entrance of the isolated refugee Lager in Schwäbisch Gmünd without prior notification. We sent an inmate delegate to the responsible authorities to let them know how we feel about the CCTV camera positioned opposite the entrance of the lager. We stated that it gives us the precarious impression to be held under surveillance control which makes us feel to be prisoners in fear and insecurity to scare us from Self-Organization in the isolated refugee Lager. But the district officials of Schwäbisch Gmünd refused to accept our demand for the removal of the CCTV camera…
continue in the link below:
http://thevoiceforum.org/node/3871

As long as deportation is still functionable for state and being cultural perform, believing in saftyness is unavailable.
Refugees are the direct affected by wars, sanctions, occupations, corruption and romantic terrorism of Europe and specially Germany. Refugees are touching the fear and inscurity in deep dark side of cities and towns. The lively life of Refugees is treated and judged by paragraphs packed in letters from masked offices to be wasted.
How much this awful image is possible to be realized by society?
How much this craped picture can projected by mass media?
How much this presented welcome culture is real?

Break deportation action in Erfurt
Chun. K informed by letter about her deport date and time at 22.02.2015, 22:00. Information comes further to other refugees and activists and this action organized spontanously.

Roma Communities are most Isolated group of Refugees in lager in Germany.
They are facing discrimination, isolation, criminalization and deportation daily by government and constitutions.
The Roma Community Thüringen start it own activities since months for self empowerment and break isolation.

On 31, Jan 2015 | No Comments | In Clip Movements Police Brutality Refugee Rights | By crosspoint

In Memory of Khaled

Rally organised by African Survival in Hamburg,
Friday, 30th. January 2015.
Khaled Idris Bahray was Eritrean Refugee was murdered in Dresden.
Since then Dresden Police and state persecuter in different statments announced their own stories about his death.

part of their statment:

In memory of KHALED IDRIS BAHRAY – Rights and Safety for Refugees!

Khaled Bahray was killed in Dresden on the 13th January 2015. ASUIHA e.V. expresses, in solidarity with his friends and family, our deep sadness in losing our 20 year old Eritrean brother.

The behaviour of Germany’s police force in this case, as in countless past cases, will serve as a distressing reminder of our challenges as African migrants. We therefore will not grieve in silence, but loudly demand safety for all.

Why Trust the Police?

The case of Khaled shows the institutional racism of the German police- who refused to see a dead African migrant with multiple stab wounds as in any way suspicious. This kind of misconduct is not without precedent, with even two African deaths in one day at the hands of the police ttp://www.mdr.de/sachsen/toter-asylbewerber-dresden106.html

Hands and feet tied to a mattress in a police cell, Oury burnt alive after a fire broke out. The supervising police officer, busy with a phone conversation, ignored cries for help and the fire alarm. Only in later investigations was a lighter conveniently found- not during earlier searches. The charges against the two officers responsible were dropped in 2008 due to lack of evidence.

Laye-Alama was forcibly tied to a metal examination stretcher with handcuffs and cable ties as the police doctor gave Conde an emetic and water to vomit out cocaine pellets he was accused of swallowing. This mistreatment led to Conde entering into a coma from which he did not recover. His lungs ran full of water. The charges against the police doctor were dropped!

The police are not following their own rules!

And so ASUIHA e.V. remains committed to exposing and attacking this growing hegemony of institutional racism in Germany in the name of justice, in the name of equality and in the memory of those killed. EQUAL RIGHTS AND JUSTICE FOR ALL! 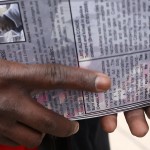 On 29, Dez 2014 | No Comments | In Clip Movements Police Brutality Refugee Rights | By crosspoint

On 17, Dez 2014 | No Comments | In Clip Movements Police Brutality Refugee Rights | By crosspoint 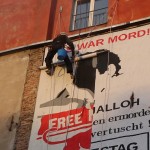 Conscienceless politicians enacted a declaration, which is classifying the countries Serbia, Kosovo and Macedonia as so called secure states of origin to live in for Roma people. This declaration was established as to enable mass deportations of Roma into these countries. In the face of the huge numbers of racist discrimination incidents occurring in these countries we have to acknowledge that living in human dignity is completely impossible for Roma there. So we have to assert that these politicians have thereby left the grounds of the liberal-democratic, constitutional structure of the Federal Republic of Germany. They have betrayed the values of the constitution in favor of an ideology and are still insisting on dividing human beings in superior and inferior or “worthy and unworthy”.
more:
http://www.thevoiceforum.org/node/3788

On 05, Dez 2014 | No Comments | In Clip Movements Police Brutality Refugee Rights | By crosspoint 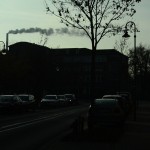 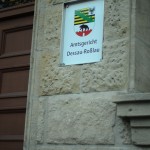