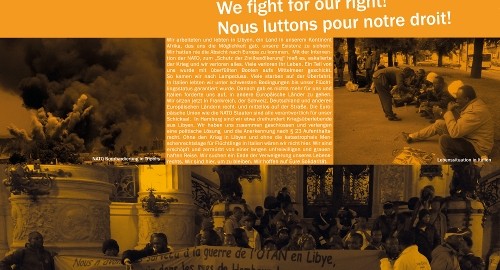 We fight for our right!

We worked and lived in Libya, a country on our African continent that gave us the possibility of a secure existence. We never had the intention to come to Europe. Because of the NATO-intervention, officially for the „protection of the civil population“, the war escalated and we lost everything.

The European Union and the member states of the NATO are all responsible for our destiny. We are around 300 survivors of the war in Libya here in Hamburg. We united and demand a political solution and the (our) recognition according to § 23 Aufenthaltsgesetzt (residence law). We would not be here if it wasn’t for the war in Libya and the catastrophic conditions of human rights for refugees in Italy. We are exhausted and worn out from a long involuntary and horrible journey. We seek for an end of the refusal of our right to live.

We are here to stay.
We hope for your solidarity.