In All
Movements
Refugee Rights
Tribunal

International Refugee Tribunal (Documentation during 13th to 16th of June 2013) 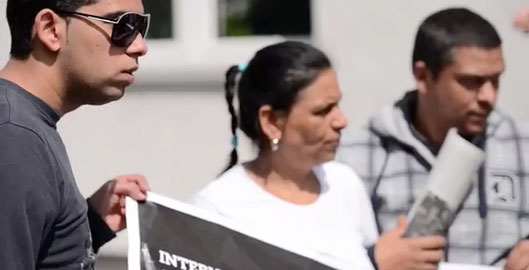 „There are many ways to kill. They can stab a knife in your guts, take away your bread, decide not to cure you from an illness, put you in a miserable house, torture you to death with work, force you to commit suicide, take you to war, etc… Only a few from these are prohibited in our state.“ (Bertolt Brecht)

International Refugee Tribunal against Germany
– United against colonial injustice –
June 13 to 16, 2013 in Berlin

9:00 a.m.
Women’s demonstration „From the refugee women’s conference to the tribunal“
Start at Hermannplatz, Berlin Kreuzberg

10:00 to 12:30
Welcome and Introduction
We are here, because you destroy our countries

Theaterperformance on FRONTEX and the Situation in northern Africa, Riadh Ben Ammar
and presentation of films made in the refugee movement

Self-organization of refugees within the THE VOICE Refugee Forum
and within the CARAVAN for the rights of refugees and migrants
Solidarity message from the mmigrant’s tribunal of Manila,
International Migrant Alliance

20:00    Final program and concert
Conclusion of the charges

Call of the Tribunal

The network of the CARAVAN for the rights of refugees and migrants organizes an international tribunal against the Federal Republic of Germany in summer 2013 in Berlin. The idea for this tribunal was generated in 2009 during the conference „United against colonial injustice in Germany“ (http://thecaravan.org/node/2125).

It is planned to present the proofs by three groups: By the victims and their families, by experts and by the self-organizations of refugees and migrants. The victims themselves and their families will tell their individually experienced pain and their own stories. The experts, e.g. doctors, lawyers, professors for sociology, law or politics, will compare the practice of the German policy with international agreements and evaluate the practice from their professional view. The self-organizations of refugees and migrants present the long history of the struggle in defense of the basic rights from the viewpoint of refugees and migrants. The tribunal reflects and concludes their experience and opens up perspectives. Prior to the tribunal and on the way to the tribunal itself, it is our central aim to compile documentation on the human rights violations and the injustice imposed on refugees and migrants. The documentation can be provided to an interested public and to human rights organizations.
In the first phase preparation meetings for the tribunal will be held locally. From 2012 onwards regular nationwide meetings will be organized in Berlin. Everyone is invited to contribute to the content and organizational preparation of the tribunal. Especially, artists are invited to present the charges of the victims and their families in a creative manner by music or theater performance. The tribunal is not a traditional court. It is our tribunal and we determine its form. The tribunal in Berlin is as well a gathering of the various refugee communities from the entire republic. Our presence is a sign of the successful struggles against Residence Obligation Law (Residenzpflicht), against isolation lagers and deportations. Each single day, in which we organize gatherings despite the existing repression and exclusion, is a proof for our continuous work and our solidarity structures.

With this call the tribunal starts today. Until summer 2013, we want to control actively the employees of the state, the state institutions and the private companies. We want to investigate, how far they violate valid national or international laws. Some act might not be regulated through any law or agreement. In these cases we claim the right to judge by our human empathies and our dignity. On the one side the tribunal shall present neutrally the facts on the other side it shall express our emotions. We want to express both, our rage resulting from the violation of our dignity and freedom and the destruction of our countries through the colonial powers and our love and joy of our gatherings. The tribunal is a place of solidarity, where we reach out our hands and claim our right to judge the criminals and the profiteers.
We invite everyone to participate actively. Share your ideas with us in the preparation process towards the tribunal. We invite especially the self-organizations of refugees and migrants to participate early enough in the planning and the organization. All experts, who observe human rights violations in their daily work, are asked to share their experiences and send reports to us. Let’s start with the tribunal today and report on your experiences.